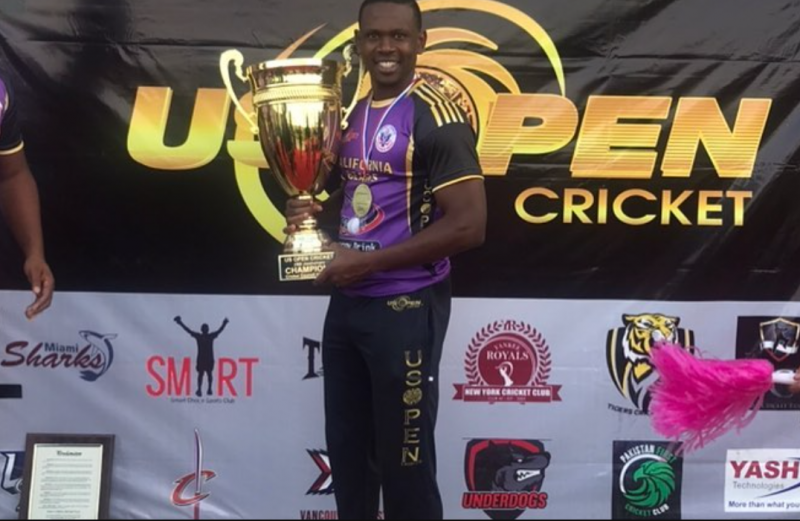 2018 has been a great year for the development of cricket in America. The national team successfully achieved promotion Division 3 in the ICC World Cricket League, and most recently, the Central Broward cricket ground in Fort Lauderdale hosted the tenth edition of the US Open T20 league.

The US Open isn’t exactly a well-known T20 league, if you were to compare it to some of the much more high-profile events like the IPL, BBL, PSL, CPL, and Vitality Blast. However, this event has not only proved to be a catalyst for budding American cricketers, but has done superbly to rope in eminent overseas recruits from different parts of the world. Competitions have been organized for various age groups, which bolsters the growth and spread of cricket among the youngsters, who have ambitions to represent America.

The final was always going to be a difficult encounter for the Bears, given the stacked squad that the Somerset Cavaliers had. Notable players for the Cavaliers included: Jamaica Tallawahs opening batsman Kennar Lewis, who most recently played in the T10 League in the UAE, former Sussex and Essex all-rounder Ashar Zaidi, former USA captain Asad Ghous, USA and former Windies opener Xavier Marshall, and former Proteas seamer Rusty Theron. Most of them were vastly experienced and had plenty of accolades under their belts.

However, after stumbling to a slightly below-par but competitive 145 for 9 in the allocated 20 overs, the Bears bowlers took center stage. After a fast start from Kennar Lewis and Gajanand Singh, a combination of skillful, economical bowling and quality fielding staged a game-turning collapse. The chief architect of this win was Navin Stewart, who took a splendid 5-wicket haul and conceded just 15 runs in his 4 overs. Despite 20 runs being required for the Cavaliers to win, left-arm spinner Akeal Hosein held his nerve and made sure his side would prevail by two runs.

It definitely was a nail-biter, and an absolute treat to watch the game. The league might have been less than a week long, but the level of entertainment was at a record high. Stewart’s incredible performance earned him the Man-of-the-Match award, and it’s not the first time he’s delivered under pressure.

In the past, he’s been part of the Caribbean Premier League, and gained notoriety as a middle-order finisher with his brawny striking, as well as an accurate medium-pace bowler. In 2009 and 2013, the Tobagonian allrounder featured for the Trinidad & Tobago national team in the Champions League T20. The first time around, they nearly won it; plenty of clinical, power-packed performances took them to the final, where they finished runners-up to the New South Wales Blues.

Recently, Stewart has been playing frequent cricket in the United States, and had plenty to share about the rise of cricket here.

Q: Congratulations on the great win, and well done to take the 5-fer. How did it feel to secure a tense win in the final over?

A: Defending 20 runs after I bowled a decent penultimate over, I backed Akeal [Hosein] to come through, as well as the team did. Taking a fifer in the finals felt very special, especially given the position we were in as a team. It totally swung the game in our favor.

Q: Overall, how was the experience playing in the US Open T20 this year? And apart from winning the tournament, what else was your favorite part in your stay at Florida?

A: Out of the 10 US Open tournaments, I’ve participated in 7. And this one was very special to me as it’s the first time I’ve won it! To be named man of match made it even more special! Coming into the Bears team, I had a point to prove, and it was a very good tournament for me in all 3 departments as I’ve contributed runs, wickets, and brilliant catches for the team. My favorite part besides winning was seeing the kids from different age groups on show. It adds a special flavor to us open 2018 because they are the future of the sport here in America. I also enjoyed getting some shopping done in Sawgrass Mills, as well.

Q: I remember you told me you’ve played in several places across the US. Which places are your top 3 favorites and why? Also, how does playing cricket in America compare with Caribbean regional domestic cricket?

A: My top 3 are Florida, Houston, and Dallas. In terms of quality, it’s Florida because of the caliber of players that came for the US Open! Houston will soon be the main hub for cricket in the USA with the fields of dreams coming at Pier View, also my home club is based there! Dallas has one of the best indoor facilities and infrastructure for cricket going around the US, and the fact that the DPL (Dallas Premier League) has all games played under lights has made it one of the most attractive places to play in the country. That encourages huge supporter turnout. With more and more turf pitches coming through out the USA, the gap is quickly closing [relative to the Caribbean] as talent is not lacking here. The HPL (Houston Premier League) is also a big hit.

A: Ian Bishop. I’ve always wanted to bowl fast as him! He actually was the one who gave me my first big break in cricket! Favorite memories would be staying up late to watch Brian Lara bat against the Aussies down under, even though my mum would berate me to go to bed.

Obviously the very first game [in the CLT20] I played at the quarterfinal stage wen I smashed 33 runs off 11 balls including 27 in one over! That tournament on a while was a defining moment in my career!

In the CPL, getting Michael Hussey, one of my favorite batsmen of all times, out bowled. I also got his brother David out bowled as well. It was great to get the wicket of KP as well.

Q: Finally, with 2018 coming to a close, what are your cricketing goals/resolutions for the new year?

2018 was a good year and ended brilliantly with winning the US Open! I haven’t set much goals for the upcoming season other than to keep working hard on staying fit and healthy, keep performing, and staying on the park as long as possible and see what doors open up for me.

High-profile annual tournaments held in the US have revolutionized the level of cricket in the US. Despite being an associate member, the ICC has done well to subsidize the development of the sport and help organize frequent competitions to garner interest among players and fans of all ages. The spectator turnout during the regional qualifiers in Raleigh were in the thousands, and the situation is bound to get better in the near future. America is planning to host a full-fledged T20 league either next year or in 2020, and USA Cricket’s project manager Eric Parthen is very optimistic.

As far as this year’s US Open is concerned, it was definitely a privilege and a joyous experience to once again collaborate with the California Bears. After this monumental win, club cricket should surge in the Golden State. International stars have had a chance to team up with both young and experienced American cricketers. Team USA’s fast bowler Ali Khan did end up in the IPL draft list, but even though he didn’t get picked, it’s still a big achievement in itself to come within striking distance of landing a deal in one of the world’s most popular franchise tournaments.

Stewart’s optimism for cricket in the US is definitely a highlight; players with vast levels of experience at and away from America are showing more and more appreciation for the quality of cricket here, day by day. The popularity of cricket might be less, relative to other sports, but holding age-group competitions at an internationally recognized cricket ground is a key step to motivate.

On the whole, the US Open was a great tournament to cover and watch. The Bears improved game by game, and every player showed his talents. It takes plenty of composure to handle intense situations, and Stewart’s skillful all-round skills have not only set the tone but raised the bar as well for American club-level domestic cricket.

Progress is the attraction that entices and moves all, and imposes new possibilities for the future.